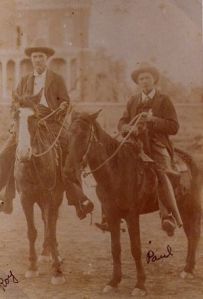 My maternal grandfather, Paul Jones Richardson, is a relative newcomer to Kendall County. He arrived in 1932 whereas my father’s side had been living there for almost 80 years.  Although I don’t know for a fact, I think Paul was named after John Paul Jones, a naval hero during the American Revolution. I think this because he had a brother named Benjamin Franklin Richardson and another named Jesse James Richardson. I was told my great-grandfather, Lemuel Mark, liked to read.

Paul was born in Wilson County, Texas 1 September 1881 on a ranch outside of Floresville. He was the second oldest son of nine brothers and one sister.  My grandmother told me a story about him growing up with his brothers. He said they were rowdy bunch. His father, Mark, demanded peace and quiet at the supper table so no one was allowed to talk. If you did, you were sent from the table. He said the brothers would put hot hominy in between the other brothers’ toes trying to get them to make a sound. Can you imagine??

In 1906, Paul married Mary Roberta Watson. They made their home in Stockdale. While living there, they had three children, Lucille, Blake, and Mary Lee. A fourth child, a son, was born in April 1918 but both mother and child died. Paul worked as a Magnolia Petroleum Agent and as a Wilson County Deputy.  Since his children were young he needed a babysitter and he hired my grandmother, Ame, to take care of them.  She lived with her parents a few door down. In 1921, they married and had three children, Betty, Howard and Sally (my mother).

Looking for a change Paul and Ame decided to move the family from Wilson County to Kendall County. They purchased several hundred acres of land just outside of Boerne in Walnut Grove.  After five years they sold the ranch and moved to town.  Paul became a deputy sheriff under Sheriff Sidney Edge.

I have one memory of my grandfather.  I used to run after my older cousin, Phil. He didn’t appreciate the joy of having a girl cousin follow him around all the time. When I was born his mother, my Aunt Betty Jean, told him he had a new girl cousin. This news made him cry. There was a huge mulberry tree in my grandparent’s yard and Phil and I were running around the tree. I remember my grandfather saying he was going to run and catch us. I remember running as fast as I could but he caught me. Phil got away. His legs were longer. I remember shrieking, laughing and getting a big hug.