I can’t believe it! It’s the second week of October. Even though friends were visitng, I thought I would be able to squeeze in a post or two last week. But as you can tell, that didn’t happen. On Monday morning, October 3, my son called. He was in the hospital. It seems his appendix didn’t like him anymore and wanted to leave and it did just that! I am thankful he didn’t try to “tough it out” thinking the pain would go away. As a result, the week quickly slipped by. 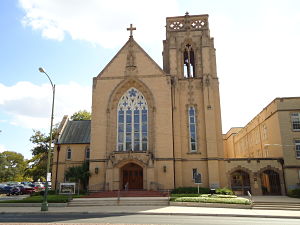 Great news! I have new information about Wilhelmina Bergmann, wife of Gustav Bergmann and daughter-in-law of Joseph Bergmann. I received an email from Maria Pfeiffer, archivist at St. John’s Lutheran Church in San Antonio. She checked their burial files and found that Wilhelmina’s maiden name was Knopp and not Finger as was stated on Mina Bergmann Federolf’s death certificate. Mina was her second oldest daughter. Wilhelmina’s birth and death dates were also listed! Yea!! She was born 2 April 1832 and died 5 May 1904. Her tombstone had 1905 as her death date and no other dates.

The Bergmann families were members of St. John’s Lutheran Church which is located on Nueva Street in downtown San Antonio. All three daughters married there.