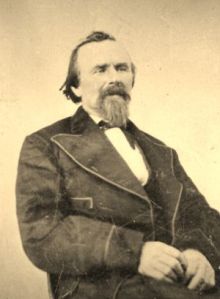 Once the Civil War was in full swing, every male from age 18 to 45 was required to register.  As the war progressed and more men left home, the Indians began to raid more frequently.  In December 1863 an act of the 10th Texas Legislature divided the state into districts and mustered men to help protect the frontier.  In March of 1864, Conrad Adam was 37 years old and enlisted with the Company for the 3rd Frontier.  The commanding officer was Capt. William E. Jones who reported to Brigadier General J. D. McAdoo. I’m not sure how much action the company saw, but they were prepared.  Conrad served from March 1 to June 1, 1864, for a total of 23 days.  He was paid $46.00 for his service but had to pay .50 for 1 powder horn, so he actually received $45.50.  At the time of enlistment, he had 1 pistol, 1 shotgun, and 1 rifle.  He was listed on the muster roll as Cornelius Adam but he signed for his wages as Conrad Adam.  Thank goodness; otherwise, I would not have been sure it was him.  Heinrich Dietert, his brother-in-law, served with him.

I have often wondered if Conrad was a strong supporter of the Confederacy.  Many of the Texas Hill Country Germans were very upset about being part of the Confederacy.  When they arrived in Texas,  it was part of the United States and that is where their loyalty lay.  The area was in turmoil for a several years with the lynching of German Union supporters in Fredericksburg and a massacre of Union German men from Comfort.  It seems Conrad’s focus was on protecting his friends, family, and home from the raiding bands of Indians, so I guess I have my answer.

Conrad’s picture was taken well after the Civil War, but I love those wide lapels.  It reminds me of the 1970s.