Yesterday, my friend Donna and I went on a genealogy field trip. We visited five cemeteries and since it was the end of September we thought the 100 degree weather was over, but not so. Nevertheless, I found everyone I’d thought I would find including, someone I hoped I would find!

Our first stop was the Old St. John’s Lutheran Cemetery sometimes called the Old German Lutheran Cemetery. It is located East of downtown San Antonio near several other cemeteries.Gustav Bergmann, Joseph and Theresia Bergmann’s oldest son, was buried there according to the St. John’s Lutheran archive records.  Of course, there always is a chance that there isn’t a tombstone, but I was not disappointed. A beautiful gray granite stone with curbing around the plot.

Next we went to City Cemetery #1 to locate Johanna Bergmann Toepperwein’s tombstone. Johanna is the youngest daughter of Joseph and Theresia Bergmann.

We visited the Hermann Sons’ Cemetery which is located in the same area as the Old Saint John’s Lutheran Cemetery and City Cemetery #1. We found Gustav’s oldest daughter, Rosa,  and some of his grandchildren plus Ida his youngest daughter. I didn’t know where she was buried and was excited to find her and her husband! 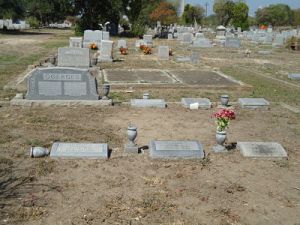 Fritz belonged to the Woodman of the World. They always have the most interesting tombstones.

This work is licensed under a Creative Commons Attribution-NonCommercial-ShareAlike 3.0 United States License.
Genealogy Tip of the Day

Digging beyond the census entries